Figured I’d leave my experience with getting my Ethereum mining hashrate up for anyone who has the same card as me, which appears to be a new variant of the (non-plus!) Nitro Radeon RX 470:

4. It didn’t flash! I compared my saved stock RX 470 BIOS to the custom BIOS and the stock bios was 256KB rather than the 512KB size of Ankorak’s version. So my model seems to be a new variant of the card without a well-documented/tried and true custom BIOS file.

5. Saved stock bios of my own card with ATIFlash 2.74 and loaded it into Polaris Bios Editor.

7. Rebooted, card is stable in Claymore with a new hashrate of 25.4Mh/s. 15% improvement, but still not great. Here’s the modified BIOS I ended up with, though I’d strongly suggest instead repeating the above steps with your card in hand, in case your variant differs!

8. [In progress] Learn how to tweak the other values. If you have the same card and find a way to get an increased hashrate/have low power or other added tweaks, please leave a comment! If this was helpful, feel free to send some ETH to 0x76F87375Dc6C7ebe45C6917Bc2a4bec2db299446.

Update: The following overclock settings got me a stable rate of 27.5MH/s (I was able to hit over 28MH/s but got some artifacts and backed down on the memory speed) 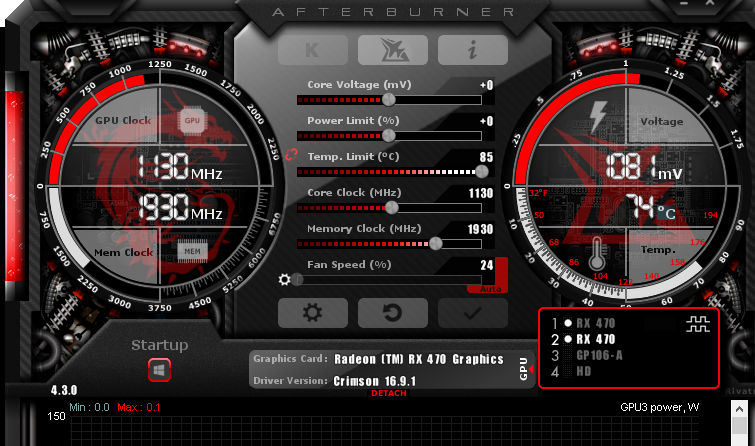